Ask a teenager how a credit card works, sometime.  10 : 1 she will say, "Take it out of your wallet, swipe it, and sign your name."  Unless the child has been educated by a savvy adult, she'll think of a credit card as a piece of plastic with the magical property of allowing you to walk out of a store with any merchandise you desire.

It used to be, one could get an unsecured line of credit at age eighteen just by filling out a form.  Many college freshmen decided which application to complete by comparing the free gifts. "Do I want a t-shirt, or a water bottle?"  Due to the Credit Card Accountability, Responsibility and Disclosure, or Credit CARD, Act of 2009, consumers under age 21 can now only get a credit card if they can prove independent income, or if someone over 21 cosigns.  However, student loans can be used as the independent income (which is, arguably, the dumbest thing ever), and finding a cosigner is as easy as convincing someone you will be responsible.  That is, the Credit CARD Act doesn't mean we can stop educating our young people.

Wisdom about using credit cards abounds in article form.  Although advice like "don't carry a balance" is great, rarely is the reasoning outlined fully.  So what is important for the new credit customer to know?  Before the waters are muddied with rewards points, weird fees, and penalty rates, kids should learn the basics of how credit works.

The reason lenders are willing to lend is because they make money by doing so. They lend a borrower some money to buy something...

A credit card agreement expresses interest in terms of Annual Percentage Rate, or APR, which, as the name suggests, indicates the percent interest the borrower can expect to pay on a balance after one year. We are simplifying for the sake of clarity, but after one year, at 20% APR, the balance owed on that $300 handbag would be $360.

If the debt is not paid, interest can be charged again, but now it's a percentage of that new, higher amount. The company would tack on 20% of that $360, so after two years, the borrower would owe $432. After three years, 120% of $432, so $518. If you are sensing that this situation could get out of hand, you are correct. The balance on an unpaid credit card versus time, being an exponential, function, is practically the definition of getting out of hand: 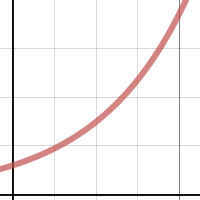 Actually, the credit card company isn't going to wait a year before they start charging interest; they charge interest monthly.  After one month, they are going to tack on one-twelfth of 20%, or 1.67%, of the balance, and 1.67% of that balance the next month, and so on.  The result is a slightly higher balance over time, as shown: 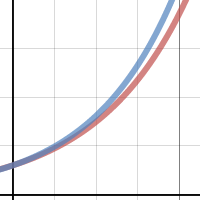 Additionally, if you made no payments, most cards would start charging you penalties (and you would have to pay interest on those, as well!)

Most people do not carry a balance indefinitely.  They at least try to pay off their debt.  What happens if you only pay part of the balance, and how much does the amount you pay matter?

There's no doubt that credit cards are very convenient, and many people use them without having to pay much interest, or any interest at all.  But it really helps to know the essentials of how they work!  Teachers: if you'd like to have this conversation with your students, and save them from financial ruin, check out our lesson, Loan Ranger.

One thought on “Loan Ranger”

Never miss an update. Sign up to our RSS feed.